Skip to content
Posted on June 5, 2015 by Leslie M Scott-Jones

A few weeks ago on my radio show I talked about an article sent to me by a friend. The article gave five reasons why men have been trained to hate women by David Wong. You can read it in its entirety here. The article is a really good read, and to my dismay, makes sense.

The main premise of the article is that all men are raised with the belief that they deserve a beautiful woman. Looking at media, movies, and the women that single male celebs parade in front of cameras at premiers, it seems plausible. Following the “logic”, when a man is denied this dream woman he gets angry, and therefore transfers this anger to all women. Interesting.

I came face to face with this recently. While rehearsing for a show and going through the usual mayhem of costume fittings one of the male actors commented about his wardrobe. I informed him that this was a period piece and his diamond earrings didn’t fit, but that it was the director’s decision if he had to remove them or not. Going into a a discussion about male and female fashion, he asked,
“How come ya’ll (meaning women) always wear them high heeled shoes?”
My response, without even thinking about it was, “To make our ass and butt look good to attract you.”
“Oh, now I understand,” he said smiling.
However, now that I think about it, that is part of the reason I wear my signature four to five inch heels. The other part of the reason is that I like them. I’m never going to be accused of being tall, or even average height at 5’5″. As I always say, if Macy’s wants to sell something they put it in the front window. My best assets are my legs and my chest, so most of my wardrobe compliments those attributes. Do I do it to attract men? Yes, sometimes. But there are those other times when I just simply want to feel sexy. And we all know ladies that slipping into a figure flattering dress and a pair of killer heels can make you feel on top of the world.

Then I thought, wait, I’m playing right into the myth that society, or maybe more accurately our current culture, has created. So if men are being trained to hate women because they believe they deserve a hot chick, what’s this training doing for women? Are we really buying into the thinking that we have to mold and change ourselves to be the “hot chick” all these men want? Are we willing to turn ourselves inside out to land this “hero”? And let’s face it, all the fairy tales tell women that there’s a Prince on his way, that he’ll fight for us, save us, love and take care of us for the rest of our lives as we live happily ever after. I know what my question is. Where the hell is he?!

If men are waiting for Cinderella, then I want Prince Charming! I want the gallant knight on a white horse drawing his sword (specifically a broad sword; I’m a size queen), with his cape blowing in the wind. Well, ladies that ain’t gonna happen. So let’s modernize it this fantasy a bit. So you can’t ride a horse to save your life. Can you open a door, pull out a chair, and pay for a meal? Good start. If you don’t know the difference between a broad sword and a rapier, then how about instead of fighting for me, you fight beside me. Get to know me. What’s my cause? What am I passionate about and how can you help? You got some contacts I can use? Or maybe you just rub my feet and hand me a glass of wine while I vent about the latest wall put up in front of me and say, “I know you can handle whatever those jokers throw at you, baby. I believe in you.” I’d be down with that! If you start down this path then I can be your dream woman, because you’re being my dream man.

But, a Prince is not what we get. We get the sloppy, no count, n-word who throws a compliment our way and expects our panties to dissolve and for us to lay down right in the middle of the frozen food section of whatever supermarket they decided to accost us in, and beg to be taken. So they’re mad that their proposition was rejected? Well, I’m mad that their proposition showed such little regard for my worth. If you see yourself as Prince Charming, then treat me like Cinderella! But you see throwing a tantrum and blaming the woman for not recognizing the true gem she has in front of her is easier. She couldn’t possibly just not be interested? Sorry fellas, but a hero with his pants halfway down his ass talkin’ about how much of a man he is, could possibly be the most unattractive thing ever. Unless you count the ones who dress nice and talk smooth, but think that you are property. When did groping me in public, scowling at other men who look at me, or never letting me be more than two feet from you at a party become sexy or make me special? All that is nothing but you showing off your trophy to all the other men in the room. That ain’t got nothin’ to do with how much you care about me, and it doesn’t prove anything except your insecurity about you. A real man knows that his real woman isn’t going to do anything to disgrace him, and also knows that at the end of the night she only wants to go home with him. Ya know why? Cause he treats her with respect and love. Something very few young men know about today.

So the more indignant men get about deserving us, the more repulsed we become.
Seems like the beginning of the end of the human race, huh? No. The good thing is that there are men who do not think like this. There are men who truly love women and appreciate them and I have met some of them. A man I have gotten to know recently put it quite well when he told me that he didn’t believe that men today really know what it means to respect a woman. I have asked him to start giving classes. He’s starting with his own son, but needs to broaden that as soon as possible. So there is hope. 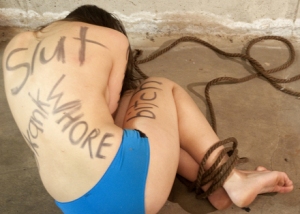 And of course when women don’t give you what you deserve you call them names. Slut, bitch, whore, become the brand you put on us just like a scarlet ‘A’. So to all the men who get mad at the woman who wears a flattering dress to the funeral to distract them, or who has the audacity to simply want them as a friend instead of a boyfriend, to the man who gets angry because he believes women are somehow taking their manhood away bit by bit….you’re right. We do wear things to distract you, we know you like us but we choose to only be your friend just to anger you, and we are taking away your manhood. Do you know why? Because if you believe that rubbish then you don’t have much manhood to begin with.

So for all your hatred of us, we hate you too. We hate you because you crowd the world with your idiotic logic and your blame of the opposite sex instead of taking responsibility for your own actions. You idiots are what make it hard for real women to recognize a real man. You make us bitter toward the entire male species because of the horrible behavior you perpetuate without any remorse or concern for the damage you do. We hate wasting our time on you. We hate wasting our love on you. So we refuse to do it anymore. We will no longer put up with the nonsense. We, as real, true women, will not put up with this foolish, childish behavior. We will demand love and respect from our partners. And if you cannot or will not give that to us, then you will not be a part of our lives.